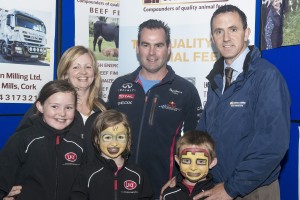 Increased milk production, grassland management and herd health are all major benefits of the Lely robotic milking system. Aidan and Sheila Deasy are milking 144 cows on two Lely Astronaut robots and have major expansion plans.They initially plan to reach 180 cows. If this is successful they will go to 200 cows but this is dependent on the grazing platform.They also plan to install a third robot later this year.

The Deasys are currently milking a herd of British Friesan cross Holstein cows so the cow type is not too extreme and they have no plans to change.Milk production has increased 10% since the farm switched to a robotic milking system as a result of the feed to yield system.The cows are milking 29kg/day Milk solids are 2.16kg/day on 3.5kg of meal on average and 1,680kg milk solids/ha. “The solids of our cows have not changed but we are now producing more milk/cow. The robots allow us to maximize milk produced/ha.” Concentrate usage is on average 1t/cow/year with a six week calving rate of 84%.

A major advantage with the robotic milking system is that it allows dairy farmers to get the most from their cows and land. Individual cows can be allocated concentrates on a feed to yield system which allows their nutritional requirements to be met and in turn, the cows milk output to reach its full potential.

With Aidan on target to reach 1,000,000L of milk sold this year and feeding 1t of meal on average, targeting specific cows is a must. “There is too much wastage in batch feeding. Information is everything when you are trying to run things efficiently,” he says.

This website uses cookies to improve your experience while you navigate through the website. Out of these, the cookies that are categorized as necessary are stored on your browser as they are essential for the working of basic functionalities of the website. We also use third-party cookies that help us analyze and understand how you use this website. These cookies will be stored in your browser only with your consent. You also have the option to opt-out of these cookies. But opting out of some of these cookies may affect your browsing experience.
Necessary Always Enabled

Any cookies that may not be particularly necessary for the website to function and is used specifically to collect user personal data via analytics, ads, other embedded contents are termed as non-necessary cookies. It is mandatory to procure user consent prior to running these cookies on your website.